As Above So Below – is an Ancient Blessing! 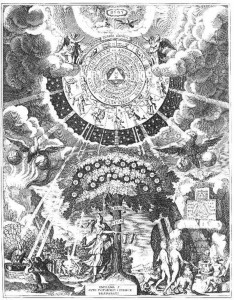 as above so below is presented in this ancient alchemical drawing with the rays of heavenly light shining down to those below.

As Above So Below is an ancient blessing. It wishes that you may be able to live up to your celestial destiny. To do so in the seeming crazy violent world, one would need the help of the Gods and one would have to be worthy enough to follow their guidance. The stars represented the heavenly lights of a higher more divine order. The moving lights or Sun, Moon and planets represented Gods who were the intermediaries of the celestial order. Their movements and relationships directed nature and were also guides of a higher nature for man in his worldly circumstances. When good things happened, one could thank their lucky stars. But planetary beings or Gods determined the tides and weather and life in general. The challenge became to live up to one’s destiny and one’s higher nature. As above so below! I  t would indeed be a blessing if one could live below as it was designed above, if one could live up to one’s heavenly destiny and make heaven on earth.

If one could not live up to his or her higher potentials and divine guidance, then disaster would likely hover over and around one’s circumstances. If one could live up to the guidance from the higher heavenly lights and beings, then truly that one would be a truly divine manifestation on this planet. It can be difficult to get away from the bad and lower energies on earth, but if one could, then receptivity to higher frequencies would become possible. Living up to the dictates of heaven implied living a holy life. Elevating one’s nature from the gross to the subtle would is the challenge to all. May you live below as the Gods live above in alignment with heavenly lights or stars. As above, so below! Heaven on earth is also prevalent today as a special blessing implying peace and harmony.

So in starting this blog, I wish you all a very sincere: As Above So Below!

Tags: As Above So Belowgodsheaven

No Responses to “As Above So Below – is an Ancient Blessing!”

Born on this day

© 2013. All Rights Reserved. Created with love by Robin Armstrong